The interview (english)with DJ Aimeline (28 years), the only female Salsa Djane in France, we did right after the one with Henry Knowles, as well on 19th July 2003 in Curiohaus in Hamburg.

Salsa4all.com: What was your first experience with salsa?
DJ´ane Aimeline: In 1995 I was on the way back from Madrid to France and I wanted to listen to spanish music. In Paris I heard "Radio Latina" and I started going to salsa clubs to learn dancing. Eight months later I took classes in cuban style in a dance company in Paris. 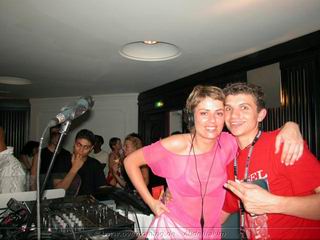 Salsa4all.com: Was there a special club where you practised salsa in this time?
DJ´ane Aimeline: Yes. In "Les Étoiles" and "La Java".

Salsa4all.com: What happened that you became Dj´ane then?
DJ´ane Aimeline: First I bought me a lot of CDs, just because I loved the music. My boyfriend worked as DJ, and he asked me to learn it, but at this time I was not ready for doing that. I just wanted to listen to the music, to buy more discs and to have a look on everything. In 2001 I did it the first time, with my (ex)-boyfriend DJ Alain. That was in "Pachanga". I went with him the first times, then we started to played the music as group of DJs ("La Alternativa"), every friday in "Les Étoiles". 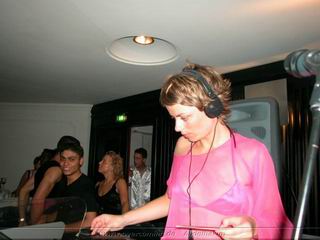 Salsa4all.com: How you felt on the first day when you did it on your own?
DJ´ane Aimeline: My adrenalin was so high... I really was very excited. But the people reacted very positively, they gave me spirit and admiration. But I don't have that much "fans" like my male collegues... ;-)

Salsa4all.com: What have you done later?
DJ´ane Aimeline: After high school and university I had a very serious job, I worked as purchising assistent in a huge company. But one year ago in January 2002 I quit there for just being Dj´ane

Salsa4all.com: Wasn't that way very hard?
DJ´ane Aimeline: At the beginning it was very difficult, but I had my family and friends, who supported me and gave me strength. If I think about this today, I'm very lucky that I have done this. Although that was a risk, I don't repent anything.

Salsa4all.com: You are working today with Henry Knowles. Do you have an idol as DJ?
DJ´ane Aimeline: Henry is a great DJ, but I don't have any idols. There are a lot of people around me I admire. I am very strong, I don't need idols. I'll go my way on my own. I will present myself, as Dj´ane Aimeline. 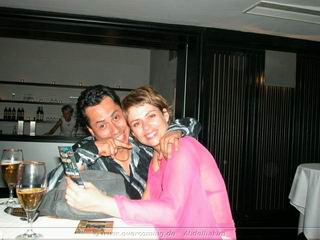 Salsa4all.com: Where are you going out at night in Paris, or where do you work?
DJ´ane Aimeline: Every Tuesday in "Pachanga" and two times a month on thursdays in "La casa 128". In September I'm going to put on the music in "Los Romanticos" in Brüssel one sunday each month. If I don't work I like to dance in "Monte Cristo", at cuban parties as well as in other clubs.