The interview with Super Mario, a famous dance instructor from London, took place on 19th July 2003 at the Eimsbütteler Turnverband in Hamburg after the workshop he gave there.

Salsa4all.com: How did you like the Salsa Festival until now?
Super Mario: They have an excellent floor here. I enjoy it here. It's too hot in the classes, but it's nice. 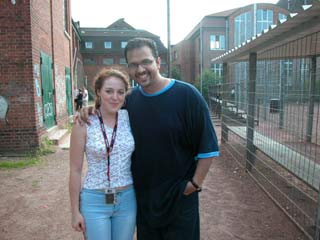 Salsa4all.com: You have been to a lot of congesses, and you are still travelling like in August in Barcelona and in October in Stockholm. Does that means fun or hard work to you?
Super Mario: A lot of fun!!! How can you complain about travelling in foreign countries and meeting nice people? 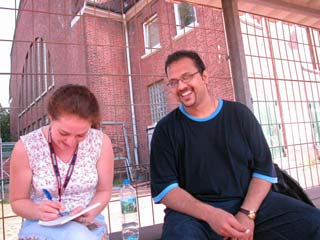 Salsa4all.com: Why, when and where did begin to dance salsa?
Super Mario: That's still the same story... Why begin men to dance salsa? I was in a bad mood, because my girlfriend left me. So I had to do do something. I learned salsa, that was on 7th July 1998, five years ago, in London, in „Bar Cuba“.

Salsa4all.com: I saw you with Robert Charlemagne in „Loughborough Hotel“ last year in December. I liked this place. Where do you like to dance salsa in London?
Super Mario: You'll find me on thursdays in „Earl's Court“, where I give classes, and as well I dance on sundays, if I am in London, in „SOS“. („Salsa on sundays“, club of Leon Rose).

Salsa4all.com: Is there a place in the world where you enjoyed dancing more than in London?
Super Mario: Yes, that was definetely in Israel. There was a congress, and there were so nice people, such an relaxing atmosphere... Simply fantastic! And they have a lot of clubs there to dance salsa...! 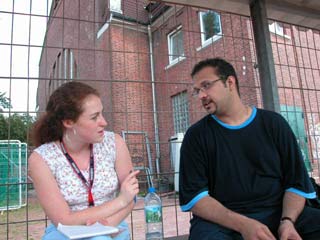 Salsa4all.com: We will see Robert in September in Chemnitz. Are you coming as well?
Super Mario: No, I won't come, but you know, I travel a lot.

Salsa4all.com: Finally, is there anything you want to tell the people?
Super Mario: Yes. Don't make it political! Dance socially! Just enjoy it!